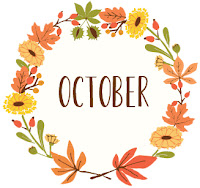 I'd had a vacation planned for the month of September for months in advance, and I had planned to bring my tablet along with me to write while I sat on the dock on a lake at a cabin in Michigan's upper peninsula, which is why I had set my September writing goal at 5000 words. Stress led me to decide, however, to take a true vacation from life; thus, I wrote not a single word during my vacation, and it was heavenly.

In the month of September—in the days after my vacation (essentially the last week of the month)—I wrote a total of 1515 words in my current work in progress, "The Glitch." All of these words were in the second chapter, which is (obviously) still not finished; it's going to be a lot longer than expected.

I don't feel guilty for not writing much this month, not like I did last month. I knew I needed to go easy on myself, and I feel better for it. I'm feeling inspired and ready to dominate these next few months of writing!

My writing goal for October is going to be an ambitious 10,000 words. But, more importantly, my real goal is to write consistently at least four days a week, for a total of 20 out of 31 days. My new job schedule allows me a good chunk of time to write at home on Monday through Thursday mornings, and it's more important for me to maintain my writing routine than it is to hit a certain word count. "The Glitch" will be my focus for most of the month, I assume, though I may venture into a nearly-finished first draft of a project I was working on earlier in the year tentatively called "Fate's Advocate." This establishment of a consistent schedule is in preparation for November, where I'm hoping to write 20,000 words—a more realistic version of NaNoWriMo for me. And I'm very much looking forward to it!

Thank you for reading, and have an amazing month!
on September 27, 2019 No comments: