Here are the books I read in the month of March! And remember I'll be participating in the A-Z blog challenge in April! See you then. :)

A series of brutal murders and a mentally unstable witness leads a detective to question the existence of supernatural powers. A crime thriller with paranormal elements, this book explores the balance of good and evil in souls. An intriguing and quick read.


To the Lighthouse — Virginia Woolf

A disabled boy desires to travel to the lighthouse near his home, which he can see out his bedroom window, but his parents are afraid to take him. This may be the only plot line, and a weak one at that, but the philosophy behind the story is worth the read. While the prose can be hard to follow, the characters in this novel are dynamic and interesting. Virginia Woolf is a classic, modernist writer, and I believe everyone should read at least one of her books. This is the only one I've read so far, so I'm not sure if this is the one I'd recommend.

After reading Flannery O'Connor's short fiction, I didn't know she could be funny, and while I was not surprised by this book's wonderfully written prose, I was surprised that I enjoyed the main character's journey more than those of O'Connor's other works. A young man moves to a new town, meets some intriguing and unique characters, and has a crisis of faith, founding The Church Without Christ. I very much liked this book. O'Connor is inching her way up my favorite writers list.

This classic is a fun, thrilling adventure story that I just couldn't put down! Even though it's quite long, over 600 pages, it is fast-paced, and the mysteriousness of the mysterious island upon which these five explorers crash is exciting. The occasional deus ex machina may turn some readers off, however.


The Sorrows of an American — Siri Hustvedt

Psychologist Erik Davidsen recalls episodes from his childhood and reads excerpts from his deceased father's writing works and memoirs while contemplating the meaning of freedom and forgiveness. Written in beautiful language, this book has great literary value. I would recommend it, especially to you, my fellow literature lovers.

As a British comedy lover, I absolutely had to read this book. I've already read Stephen Fry's first memoir and his four works of fiction, and this (his second memoir, which documents his college years and the beginning of his comedy acting career) made me love his work even more.

The Literary Lab Presents: Variations on a Theme Anthology

The Literary Lab's third anthology, Variations on a Theme is now available. My short story, "The Empty Nest" is included in the anthology, alongside 20 other brilliant writers. 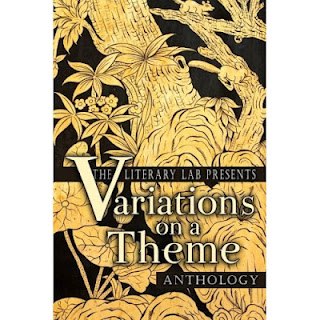 You can find a paperback version of the anthology on Amazon here:


I can't thank The Literary Lab enough! And thanks to you fellow writers, for all your support. I hope you enjoy the anthology! :)

Hey there. Sorry it’s been so long. With the all the events of the past month, my blog has not been on the top list of my priorities. But now my schedule is simmering down to its normal density, and I am planning to get back on top of things. To catch up, here are the books I read in February!

A young man and a group of his friends vacation in a castle in Italy for a summer. With his typical prose style, Amis explores the development of sexual identity and the effects of aging on one’s sense of self and one’s role in the world. The last two books of Amis’ I read let me down a little bit because of their over-the-top raunchy content, but this book restored my faith in him as a writer. I enjoyed it very much.

This is a long book, a bit dense, and I’ll admit I didn’t really get it. It takes place in Europe at the end of World War II and is considered one of the greatest American novels ever written. The postmodern prose is sometimes hard to follow, and I feel I may have to reread it eventually to get the full effect of the story.

A young Chinese man is shot in the head during a communist protest in the 1970s and is left in a coma under the care of his mother. Told in flashbacks while the main character lies in bed dying in his comatose state, the story is suspenseful and lyrical, though the pacing is quite slow. We are left wondering if he will awaken from his state, and though we know the results of the characters’ actions on the Chinese government, it is the characters and their relationships that create the intricate story.